Sky is the Limit

Do not believe that walls have a memory.If people kept … 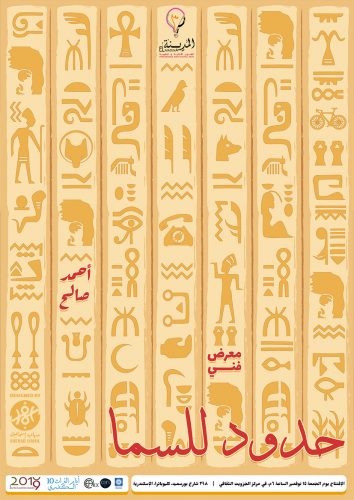 Do not believe that walls have a memory.
If people kept something to remember, the walls would keep it too.

Maher Sherif(The Surgeon) from the group “The Vault of Desire... A Consecutive Story”

The limits of the sky are shaped by ideas, politics, religion, economics, sex, male domination, the way of creating and formulating visual images, drawings and slogans that are hung above or around us. It creates uncross able limits. There are always more and more advertisements that stands in hindrance between us and a natural sky, a lot of visual symbols, lights and encrypted SMS, it’s not only limited on the picture but with the interference of the sound too, dominating the public space, and you can echo an audio clip just to look at me. The exhibition deals with the visual symbols and the audio clips and short messages that had a strong presence in the public space from the 90s until the year two thousand and ten, and the question that arises is (did images, advertisements and visual symbols created limits to our mentality that we were unable to transcend?!

This exhibition seeks to analyze these images and sounds once again…  along with bringing back the consciousness to the general feeling about these symbols… and experiencing the village’s news and what remains… The exhibition is equipped in a space that uses installation, multimedia (sound and image) and stereoscopic symbols. It will also interact with the audience through a large floor of visual symbols, you have to choose your way between them. It also puts the viewer in a new angle, where he watches these advertisements from above and not the opposite like the usual, the exhibition aims to reach a conscious emotional experience for the recipient.